The full roster of tracks for the new Enzyme K7 was announced finally and I am jumping in  my seat with joy. It is expected January 1st, 2011 which means IT'S TOO FAR AWAY!!! Well at least I had a preview of the record in Nosferatu's Thrillogy mix with the track Vows of Doubt by Synapse & Ruffneck. 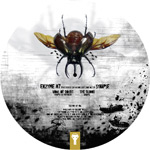 Angerfist is coming to L.A. and I'm so incredibly glad to rage to some real Hardcore. SEE YOU THERE JANUARY 22 2011!
- Ross
Posted by The Gabblog at 7:06 PM No comments:

Along with the trading of Matteo Pitossi for Jose Sendra comes the new age of Meccano Twins releases. This new age of the Meccano Twins will come along with releases having their sound determined by one of the elements of Greek philosophy and Chinese Alchemy. The first of these new releases is Ice: Pain & Fear.

Time Has Come is the A side of the record and it is something you wouldn't hear from anyone but the Meccano Twins. It starts off with the regular 32 bar intro with cold harsh sounds creating the atmosphere of the track leading to the drop of the cold robotic sample. "Your time has come." The song definitely captures the element perfectly with time stops and harshly distorted synths that sound like a harsh blizzard beating your eardrums. This song is great.

Pain & Fear, the B side, is definitely a special track to me. The song's intro sounds like the last alarms of safe haven in a harsh cold wasteland shutting it's doors, the doors close and the kick comes in. After the chaos of hypothermia ensues you hear out of the frozen paralysis the words; "I don't believe in Heaven. I believe in pain. I believe in fear. I believe in death." The song then breaks out with bit-crushed synth that sounds utterly unique and the song takes off from there. Pain & Fear is truly an amazing and unique track, listen to it or else.

If you haven't heard Gamma Release then you don't really like the Meccano Twins, since this song has been heard for ages now on mixes everywhere, it was only a matter of time before they finally released this track. Another really good tune in the old Meccano Twins style; massive kicks, dark synths, and industrial sounds is to be expected. Another stomping good track.

Ice: Pain & Fear is definitely in my top 10 of releases this year, every track on this record is great. I highly suggest buying it and giving it a real listen. It seems that the trade for Jose Sendra was an excellent choice. The Meccano Twins are back, with a vengeance. Posted by The Gabblog at 1:19 PM No comments:

Refly is the latest 3 track EP from the well achieved fresh talent of Amnesys. Amnesys has been taking the Hardcore world by storm with tracks like World Wide Crisis and Elevation, and his latest release was no less innovative.

Refly the titular track came as a shock when I listened to it the first time and heard it had uplifting lyrics. The lyrics then give way to high ranged synth that takes the listener to the upper-range of their emotions. This song isn't my absolute favorite song ever but it is definitely an interesting tune.

I first heard Control D Future when I was listening to a live DJ Set of Amnesys on Masters of Hardcore's 15th anniversary celebration party. Control D Future is by all means a very mainstream but strange direction for a hardcore track. It starts out with a bassline and minute kicks that give way to Rage Against the Machine samples and a synth line that screams in your ear, that some would find plane annoying. It was definitely an innovative track and something I would expect out of a man like Amnesys.

System Crash, is definitely one of the best songs of the year hands down. An aggressive tune with drum & bass feel, and Lenny Dee lyrics to boot. The song's melody is a climatic adrenaline pumping wonder. I really can't put into words how this song is, it's best left to the listener to experience.

Probably one of the more mainstream releases this year but still heavily note worthy. With almost every mainstream producer trying to follow up to a release like this it is definitely something Amnesys should be proud of. Refly was something you wouldn't get out of anyone but Amnesys.

Ophidian's latest releases finally dropped last month and I promptly purchased it and listened to it 10 trillion times already. It was released on Enzyme Records' sub label, Enzyme X, an experimental label for Enzyme producers to release experimental tracks that are just a tad to bad ass for mainstream ears.

Abandon, the A side of the record is by no means a bad track. Ophidian has outdone himself once again with another well composed, well produced, and with a flat out Ophidian aura to it. Abandon is a 9 minute and 27 second song that begins with the tell-tale crackling noises of the needle dragging against the bumps of a record, coinciding with mellow piano keys. 1 minute and 19 seconds in bit-crushed kicks and a woman's voice begin the build up of a profound hardcore experience. The kick drops and breaks off again with breakcore reminicent pauses and then is accompanied by a haunting piano melody and the song takes off from there. By far this is the best song this year.

End the Earth, the B side of the record deserves no less if not equal attention as the first track. Break-beats, destructive kicks, and child like toy box synth lines are the key phrases here. I am certainly fond of the source material used for the sample, "I will sing the song that ends the earth." End the Earth definitely has the Enzyme X sound that people where expecting, especially out of Ophidian.

Enzyme X 31 was definitely the more unique release this year, during a point in time when almost every producer out their is using the 90's style synths that Amnesys made so popular with the release of System Crash and Control D Future. Enzyme X 31 was a breath of fresh air in a year of Hardcore stagnation.

So apparently Ophidian is doing video interviews. Daniel and I are about to hop on that.
Posted by The Gabblog at 8:08 PM No comments:

YOU PUSSY MOTHERFUCKERS
Posted by The Gabblog at 9:03 PM No comments:

The Gabblog
The Bay Area, California, United States
The Gabblog is run by producers/DJs Ross Burkert (Tilduh) and Daniel Clawson (Clockwork Menace). Hardcore is more than music for us. It's a passion, obsession, manifesto, and lifestyle. Here we post new releases, events, track reviews, production/DJ techniques, and our thoughts on the future of Hardcore and electronic music. Our goal is to create a thriving Hardcore scene that will put America on the map in the hard dance world. If you want to contribute, ask questions, or just say hello let us know and we will be more than happy to talk with you. Email: gabbloghc@gmail.com